Is there a reality of life after death? Philosophers, scientist, teachers, and prognosticators have debated the subject for eons.

Logically, I believe there is life after death. However, since nobody other than Jesus of Nazareth claims to have died and come back; there's no way to know for sure; or is there?

It seems logical to think that if there is an after life, that this life is associated with and in is similar in nature to the life of the Eternal God. So if an Eternal God exists than it's likely that there is life after the death.

Accordingly, there are a number of qualitative observations worth noting.

A. Religious Observation:
Almost all religions in every culture in the world have a in an after life, in one form or another.

The question can be asked. Why have so many people in so many times, in so many places believed in the same thing. Some dismiss religion as ignorant superstition. But it's not easy to dismiss the overwhelming number of cultures (educated and primitive) world over which believe in an after life.

B. Observation of the Universe:
We have seen amazing images of space from the Hubble telescope and others. It's difficult to wrap the mind around the vast reaches of space. Space is so vast that distances are measured terms of how far light travels in a year. (Light travels at a speed of 186000 miles a second or 700 million miles an hour.) Some star systems are 100's of light years away.

We marvel at how gravity keeps people on the earth without crushing them; yet this same force holds solar systems and galaxies in vast predictable orbits!

Measure the awesome energy of a single star, than multiply that by a number of stars beyond calculation.

The enormity in scale and power revealed in our magnificent universe, suggests an intelligent Creator of similar size and power.

C. Environmental Observation:
Take a walk next to the sea at night. The sound of the churning water in the dark is the sound of a great beast! Listen and marvel at the power necessary to constrain the beast, so that you are not dragged down to the depths. If you've every lived through a tornado, hurricane, earthquake, etc. than you understand that just a slight flex of nature's muscle has the capacity to destroy man, and everything man made.

D. Observation of Life:
Some have lived a lifetime on this ball of dirt. They were born. They lived. They died. They experienced nothing. They observed nothing. They concluded along the way, "This is all there is."

And along the way they wondered, "Is this all there is?"

These are but a few of the many qualitative observations that could be made concerning a Creator and life after death.

But is it possible to quantify the existence of the Creator and therefore life after death? 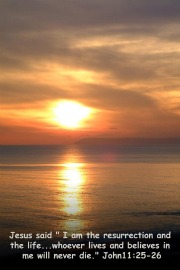 I think there are two solid lines of inquiry available to one willing to make life a spiritual laboratory.

One line of inquiry is to examine the testimony of God Himself concerning specific life situations. The Bible makes many specific and startling promises, when taken at face value!

Some may object to the Word of God (The Christian Bible) on the grounds that it is suspect due to the number of translations, possible errors, and denominational spin.

Yada. Yada. Yada. Look, if God is who and what we know Him to be, than He is able to get His message through, no matter what.

Is anything too hard for God?

In any case, if the Bible IS NOT God's Word; than there is no loss investigating its claims. But if it is what it says it is, than you just might see life after death. When we do what the Word says, we see the affects in our lives. It really is that simple.

The second line of inquiry is to conduct experiments by following God's directives in specific situations looking for specific results. Then (quantify); i.e. measure the effects which can only be attributed to Godly intervention.

What Does The Bible Say About Life and Death?

Genesis 2:7 (KJV) "And the LORD God formed man of the dust of the ground, and breathed into his nostrils the breath of life; i.e. (the vital force that makes a body live)."

Man was formed. But he was dead, until God breathed His eternal Spirit into man's body.Man was created to live forever. There is not even a hint of death in Genesis Chapter one.

Genesis 1:27 (NIV)
"So God created man in his own image, in the image of God he created him; male and female he created them."

Man was gifted with the eternal life of God.

Genesis 2:15-17 (NIV) "15 "The Lord God took the man and put him in the Garden of Eden to work it and take care of it. 16 And the Lord God commanded the man, "You are free to eat from any tree in the garden; 17 but you must not eat from the tree of the knowledge of good and evil, for when you eat of it you will surely die."

Well, you know the rest of the story. The first man and woman believed the lie. They disobeyed God, ate the fruit, and died instantly. Reading Genesis Chapter 3 we realize something has changed. But we don't immediately understand what has happened.

The death they died was a spiritual death, followed many years later by actual physical death. Here's what happened. When the first man and woman disobeyed the direct commandment of God they were instantly spiritually separated from God.

Man was created as a tri-part being; i.e spirit, mind, and body. The spirit was created to be the dominant element. Separation from God (spiritual death) means either the mind or the body become dominant.

PHYSICAL DEATH = WHEN THE SOUL SEPARATES FROM THE BODY

We know they were separated from God because the Bible says in:

Genesis 3:8-9 (NIV)
"Then the man and his wife heard the sound of the Lord God as he was walking in the garden in the cool of the day, and they hid from the Lord God among the trees of the garden. But the Lord God called to the man, "Where are you?"

Obviously, God knew where His creation was hiding. So, "Where are you" indicates that the first couple had moved from their place. They were separated from the God to whom they had been spiritually joined. A poor analogy would be like your spouse getting out of bed while you slept. Now, their previously occupied place is empty and cold.

Here's the point about life after death you need to see.

Separation from God is spiritual death, but it does not mean the spirit of man ceases to exist. Remember, the spirit (the vital force that makes alive) was eternal breath, breathed into man by an eternal God.

The gift of God which is your spirit, having been overlaid with a lifetime of memories, emotions, and experiences; which has become your soul will go somewhere when your soul separates from your body. There is life after death.

For if we conclude from qualitative observation the likelihood of the existence of God. And if we further conclude that every corner of His universe bears His stamp of eternal power. Than if this being, we call God exist; we can finally hypothesize that man, like everything else in God's universe was originally created to live, always.

It is possible through quantitative analysis in the laboratory of life using God's Word as a reagent to observe the effect of the Spirit of God upon our life.

Now, this is as far as this article on life after death can go. There is much more breadth and depth of research that must be done. But that is beyond the scope of this article.

There is life after death. But where does the soul go after separating from the body?

For further study, discover how the Lamb of God solved the problem of death and guaranteed that life after death will be in His Presence.


Return to Bible Basics from Life After Death